Taken from the Blazing Saddles Column in the Tayside Courier Weekend Supplement 21.7.12

In the last of his Tour de France retrospectives, Scot Tares considers whether Mark Cavendish is the greatest sprinter of all-time.

As I sit and write this, the 2012 Tour de France has hit theAlpsand battle has commenced between the main protagonists. By the time you read this it will be fairly certain whether or not Great Britain will have its first ever Tour de France overall winner in Bradley Wiggins. For the moment however, let us look back a few years to the 2009 Tour. 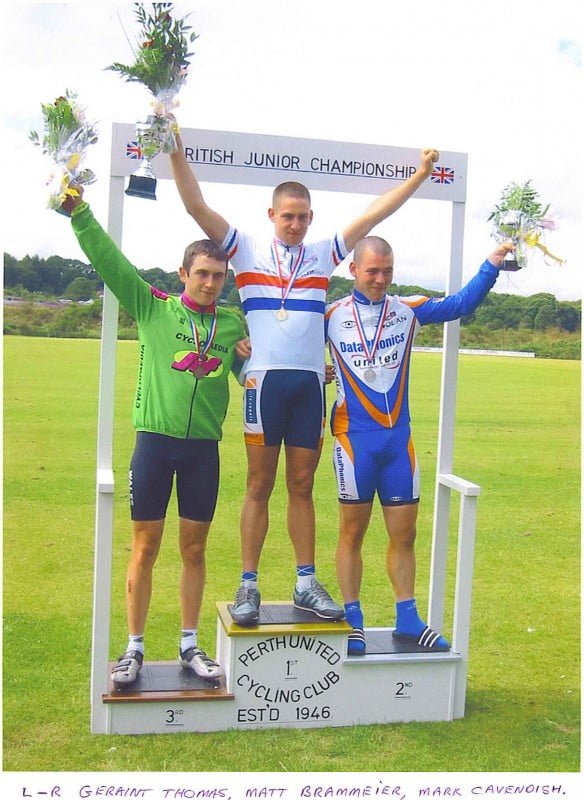 Cavendish takes 2nd place in the British Junior Champs in Perth, behind Matt Brameier and ahead of Geraint Thomas

The 2009 Tour de France was a breakthrough year for Bradley Wiggins; riding for Garmin-Slipstream, he was showing he was making the transition from a World Champion track pursuit rider to a road-man with real potential. He finished fourth overall in Paris and during the following off-season he signed for the newly formed Team Sky, although under a cloud of protracted contract wranglings between Sky and Garmin. The show of class in 2009 was just a flash of the potential he had, but it would be a few years before he would be able to show that again in the Tour.

Meanwhile, another British rider was making history and laying down the gauntlet to the world. Many saw, and some still see, Mark Cavendish as precocious and arrogant, but to my mind his character reflects an utter dominance in his sport, the like of which has never been displayed by any other British rider. Cavendish does not just win; he often destroys the rest of the field with a sprint so ferocious he looks like he is riding for his life and often the emotional outpouring at the end demonstrates that he has put every ounce of his being into winning.

Cavendish’s sprinting finesse had been proven in other races over the previous few years, but it was in 2009 that he opened his account for Tour de France stage wins. By the time the race reachedParisafter 20 gruelling stages, Cavendish had already raised his arms in victory as he crossed the finish line on no less than five occasions. However, if his rivals were still in any doubt as to who was the best, Cavendish was about to kick that notion into the stratosphere.

As the teams lined out on the Parisian roads on the closing minutes of stage 21 of the 2009 Tour de France, Cavendish’s team, HTC-Highroad, had paced him to the front of the peloton. The speed was close to 40mph and Cavendish tucked in behind two of his team-mates, George Hincapie and Mark Renshaw, who led the race round the final corners. The television camera sped alongside the riders on the final straight and Mark Cavendish jumped out from the wheel of Mark Renshaw and exploded into his sprint. The commentator, Paul Sherwen exclaimed, as Cavendish crossed the line first, “I don’t think we need a photo-finish for that one as there was nobody else in the photo”. Indeed the overhead shot of the sprint finish made it look more like a solo attack, rather than a closely fought sprint finish, as Cavendish was clear of his nearest rivals by metres, rather than centimetres. In Mark Cavendish, a new superstar of not just British Cycling, but World Cycling, emerged from that 2009 Tour de France and with his Tour de France stage win tally mounting every year and an Olympic Gold medal in his sights, Cavendish has already started carving his name on the wall of the greatest cyclists of all time.