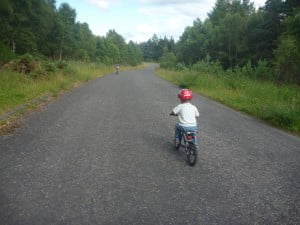 A family friendly cycling route on the old A9

Cycling in Britain has never been more popular, and the successes of our Olympic and World Cycling Champions have further boosted the profile of an already growing sport. Whether it be for commuting, health benefits, environmental and financial concerns, or just wanting to revisit the sheer youthful joy of hurtling along under your own power, cycling is now a big deal. Whatever your reason for getting back into the saddle, now’s the time to start the New Year in a positive pedal-powered way and cycle your own trail along the roads and tracks of Courier country.

“Nothing compares to the simple pleasure of a bike ride” – John F. Kennedy

When I think back to my first bike I can still remember the feeling of independence it gave me, allowing me to explore further and further afield with my friends. Now my own children are cycling and I was keen for them to have the same experience, even though things have changed since my childhood. This is partly to do with perception, but undeniably the roads are now busier and as a parent I would think twice about letting them ride about as I did so many years before. Thankfully there are still many, many options, both on and off road for families and individuals to ride. Over the coming weeks we will be looking at some of the popular and some of the less well known routes, as well as adding other little bits of information to get you out and about on your bike.

Driving along the A9 North of Pitlochry you may have noticed the National Cycle Network Route 7. Although it is surrounded by dramatic mountain scenery it is not the most appealing route for a family cycle. However, one section from Calvine and Struan to Dalnacardoch is a hidden gem. It follows the old A9 and is a surface suitable for all kinds of bikes. It isn’t closed to traffic, but since the only reason for driving along its length is to get to the few houses, it is virtually traffic free. Indeed the sunny summer’s day our family cycled along it we didn’t see a single car. Ideally for young children it is also very flat and our little boy rode the six miles out and back on his balance bike. As you ride the first few miles you are surrounded by natural woodland, with the River Garry on your left, you can almost imagine you are in the middle of nowhere, rather than right next to the busy A9. There are numerous places to stop for picnics, and the thought of cheese sandwiches, crisps and juice was more than enough motivation, if any was needed to keep our kids riding.

Route: Calvine to Dalnacardoch (return by same route)
Grade: Easy – Suitable for all levels of cyclist, including young children.
Distance: 12 miles (19km) return (the route can be shortened by returning before Dalnacardoch)
Climbs: No climbs, but a gradual ascent of 313ft (95m) in 6 miles (9.7km)
Start: OS 1:50,000 Map 43 – NN803 659
Finish: OS 1:50,000 Map 42 – NN723 704
Parking: There is plenty of roadside parking available by driving onto the first section of the cycle route.
For the more adventurous: The route can made into a circular by turning South at Dalnacardoch and following the old Military Road to Trinafour and returning to Calvine via Glen Errochty. This is a challenging climb from either side, but one of the best in the area and I would highly recommend the climb from Glen Errochty.