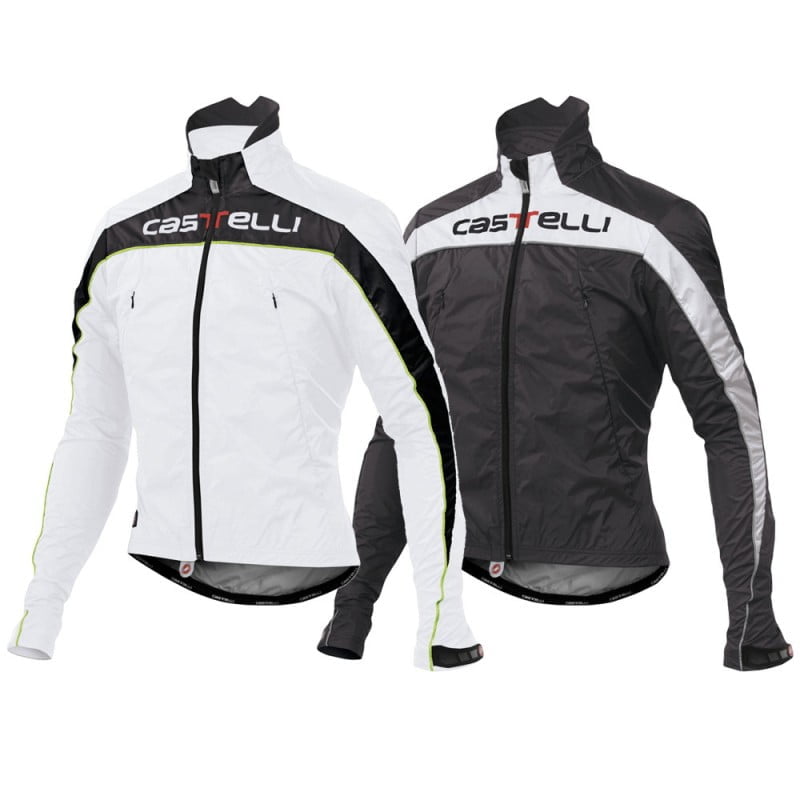 I have a certain nostalgic tendency towards cycling and my preference is always for Italian. It’s not just a romantic notion though, as the Italians have a passion not just to produce the best, but to do it in the most stylish way possible. For this very reason I have long been a fan of Castelli for this very reason. In this respect the Castelli Fusione Windstopper Jacket does not disappoint; clearly a lot of time has been taken to ensure this jacket looks good, but no matter how stylish something looks, it is the functionality that counts on the day.

The cut of the jacket is good and lends itself to the racing heritage of Castelli with sleek lines and a fit that avoids material flapping in the wind. I have long arms and I was pleased to see that with my arms stretched out on the hoods of the bars my wrists were still covered. Weighing in at 294g the jacket is more of a bantam than flyweight, but it’s certainly no heavyweight. The slight weight increase offers more protection from the elements, but is on the cusp of having too much bulk to pack into a jersey pocket; it does, but only just. However that is not really an issue as the “Fusione” is more of a jacket to be used on days when the weather is such that wearing a jacket from start to finish is the order of the day, keeping your lighter and thinner, packable jackets for less inclement conditions.

The worst of the Scottish winter weather

And so it was Christmas Eve and the forecast for my northerly bit of the UK was horrendous: gales blowing at 60mph with gusts of 80mph; driving frozen rain with snow at higher levels; not the ideal riding weather, but I had signed up for the “Rapha Festive 500” and nothing was going to stop me heading out. I donned my “Castelli Fusione Windstopper” jacket, flicked up the collar and got my head down. The first few miles were directly into the headwind and progress was slow, but I was warm. My Windstopper jacket was doing its job well so far. I’ve tried various “active shell” jackets before, with varying degrees of success, but for this kind of weather I would usually wear a heavier weight jacket and several layers, with the inevitable “Michelin Man” feeling the result. There is nothing worse than feeling overly bulky as you head out on your ride, so the close fit of the Fusione combined with its weather beating qualities was a delight. Underneath I wore a long sleeve club training top and underneath that a long sleeve merino base-layer and that was more than enough to keep me warm. Indeed if the mercury level had been a few degrees higher I may have been too warm, but the Fusione had that under control with front and back zipped vents to allow a through-flow of air. As I rode on, conditions deteriorated; rumbles of thunder emanated from the hills above me and the sky grew very black indeed and it felt like I was riding into the depths of “Mordor” from “Lord of the Rings”. My average speed was pitiful as I fought against the rising wind speed which was now carrying flakes of snow past me at a high rate of noughts. Mixed in with the snow, hail and frozen rain needled my cheeks, but the high-backed collar of the Fusione, with its soft fleece like material, kept the sting from the back of my neck. The descents were where the Helium “Windstopper” fabric really showed its capabilies  stopping the chill dead and keeping me warm and comfortable.

My jacket (white) was highly visible out on the road in the dark and dingy conditions and the reflective details across the shoulders, sleeves and on the vent lanyard straps as well as on the distinctive “Castelli” branding across the chest and classic “Castelli scorpion” gave me a confidence that I would stand out to other road users no matter how dark the sky grew. An elasticated hem kept the chills at bay around the waist and Velcro adjusters at the sleeve cuffs ensured a snug closure at my wrists. The seams are stitched rather than taped, but so far I haven’t experienced any issues with wetness making its way through. Overall the Helium Windstopper® fabric does its job well and despite the conditions I never once felt a chill. The Fusione is water repellent, rather than waterproof, but it did a good job of keeping me dry. Prior to trying out the Fusione I had read some reviews that breathability had been an issue, but I am glad to say that I had no such problems, even without using the sizeable vents. The zipped vents appear with two on the front and two larger ones on the back. The front vents are fairly standard, but the back vents are notable for the lanyard strap that hooks onto the zip. This allows easy access to the top zip, without having to stretch your arm; this works well on opening the vent, but is not so successful when trying to close the vent again. A bottom zip also allows opening of the vent and access to rear pockets in your jersey underneath. There are no pockets on the Fusione, which I wouldn’t really expect on a “race-cape” and the inclusion of them would have added bulk and taken away from the sleek lines of this jacket and added little functionality.

Overall I have been impressed with the Castelli Fusione Windstopper Jacket, both for its notable Italian style and flair, but more-so for its remarkable ability to shrug off the worst that the Scottish winter weather could throw at it. I’ve ridden over 300km wearing it in the grottiest conditions and it is still looking new and doing it’s job well.

Italian cycle clothing manufacturer “Castelli” has a long and rich history of supplying clothing to generations of professional riders such as Italian legends Fausto Coppi and Gino Bartali. The brand as we know it today however started in 1974 with Maurizio Castelli and it was at this point that the innovation really kicked in as the company started to produce a series of “firsts” for cycling kit, including the first aerodynamic lycra shorts and first functional thermal winter cycle clothing. Professional riders like Eddy Merckx, himself someone who was always looking for the cutting edge to gain advantage on his rivals, gave the company a huge boost by wearing a Castelli body-suit on his successful “World Hour Record” ride. Perhaps one of the most important innovations by Castelli however was the pioneering of the sublimation dye process that allowed colours and logos to be added to technical fabrics; from that point on, cycling’s commercial aspect would never be the same again. Sadly Maurizio Castelli died in 1995 from a heart-attack, at the age of 47 whilst cycling up the Cipressa, a climb made famous by its inclusion in the one-day Queen of Cycling Classics “Milan San Remo”. Castelli’s legacy lives on however in the brand that bears his name and his design flair and innovative approach to cycling kit continue to be evident in the range of items that the company produce.