Scot Tares finds snow excuse for getting out on his bike.

Sometimes it can be difficult to motivate yourself to get out on your bike, but when you do, these times are often the best rides that you can have. So it was a few Saturdays ago, as the snow came down heavily and I sat in my warm house with the fire crackling away; to be honest if it hadn’t been the sad, and well-practised guilt-inducing look in my dogs eyes I wouldn’t have gone out at all. I knew they were desperate to get out for a run, so I packed my mountain bike on the roof of the car and drove up to Craigvinean, by Dunkeld. 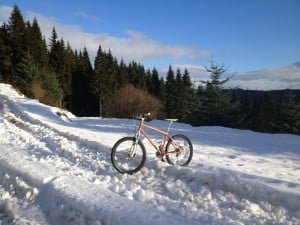 The snow was deep and untouched, save for a few animal tracks, and I broke the trail ahead, leaving a snaking tyre track behind, with a dab of a pedal on each side as my feet scuffed through the snow with each stroke. It was tough going and I could hear my heart thumping away, but I knew I needed to press on to maintain traction. Momentum was an absent friend that day and despite being in my smallest gear, I was still grinding the pedals around to maintain any forward movement at all. Focussing on the track ahead, I tried to keep my upper body as relaxed as possible to aid with keeping the bike as straight as was manageable; no mean feat as the front wheel slipped left and right each time it did so I lost a bit more speed and had to fight to keep the bike upright. The dogs ran ahead of me, occasionally looking back to see what was taking me so long.

Rather, the most recent innovation has presented aluminum outline that add quality best mountain bikes under $500 and sturdiness to these least estimated bicycles. These bicycles are most appropriate to section level riders

After 3 miles of climbing I passed below the summit of Creag an Uamhaidh and finally hit the downward slopes. I descended at speed, snow whipping up from the front wheel like a snow plough and my back wheel fish-tailing behind. The dogs were now in their element and sprinted past me, running at top speed. The descent, as it always is, seemed too short for the effort of ascent, but it had been exhilarating.

That evening I lay in front of the fire at home reading and my stomach muscles ached. The effort of keeping the bike stable and moving had obviously employed more muscles than just those in my legs. I recalled how tough the climb had been and how much I had grovelled up it and decided that I would head out and do it all again tomorrow.

Get out and ride