Scot Tares finds he has a love-hate relationship with indoor training. 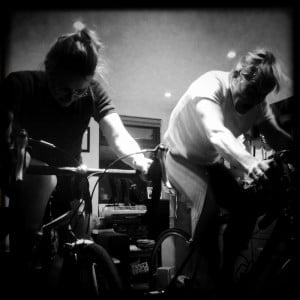 Hate is a strong word, but that is exactly how I used to feel about turbo-trainers, the indoor resistance unit that your outdoor bike clips into allowing you to pedal away to your heart’s content without ever actually going anywhere. For me training on the turbo was an act comparable to Sisyphus pushing his boulder up the steep hill, only to find it roll back down before he reached the top. However, no matter how interminable I found the act of indoor training, I knew deep down that there were real and tangible benefits to be gained and quickly too, but I found the whole process intensely boring and would have been more enthused at the prospect of repeatedly hitting my thumb with a hammer. I’m not the only one either; cyclists often speak of turbo-training in hushed voices and with fear akin to that of the Pitenweem witch trials and tortures of 1705. Manufacturers of turbo-trainers are very aware of this mass aversion to their product and more and more are producing virtual reality equipment that allows the indoor trainer to simulate high mountain passes of the French Alps, or even connect up with other riders around the world for virtual on-line races. This is all well and good, and certainly an improvement on cycling alone in your garden shed on a wet Tuesday night in November, but I feel it is defeating the point a little; there is some training benefit to be had from such activities, but it still lacks focus and specificity. If I want to simulate riding in the real world I would rather just get out on my bike and ride outside; for me, the turbo-trainer is a tool that allows for intense training in short periods and it was with that realisation that my hatred slowly turned to love. The point I had been missing for so long was that I had seen the turbo-trainer as something to replace my outdoor rides with when the weather was bad, and many cyclists do use it this way, but this is where the disdain creeps in. Instead, now I use the turbo-trainer to complement my outdoor riding and with planning I can achieve noticeable improvements in my riding in short periods of time, due to the increased control that the trainer gives you over the intensity of the session. The key to such sessions is short but intense bursts of energy known as intervals.  Devised for specific goals the duration of the energy burst in these intervals can be as short as ten seconds and interspersed with periods of easier pedalling to recover. These kind of efforts are painful and difficult to complete, even when they are very short, but they acutely focus the mind. The point is that if you find turbo training boring, then you aren’t trying hard enough. Changing your indoor training regime to short, meaningful and focussed sessions will provide allow you to incorporate many short periods of high intensity pedalling, which accumulated will to lead to big improvements in your riding performance.

Remember, it’s not the turbo-trainer that’s boring, but the approach being used. Get out and ride.

Get out and ride.

Where to Ride: Monk Myre – Blairgowrie