Taken from the Blazing Saddles Column in the Tayside Courier Weekend Supplement 17.11.12

Scot Tares gets on track with his riding

“Cycling has brought me a lot of pleasure” – Sir Chris Hoy 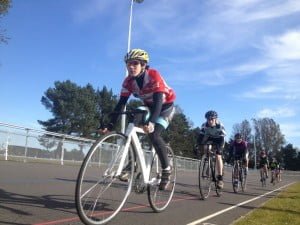 Sir Chris Hoy, the UKs greatest ever Olympian and now immortalised with an eponymous Velodrome in Glasgow, is a household name who has inspired thousands of kids to get on their bikes and ride. Even my two children insist on a certain breakfast cereal because of Sir Chris’s face on the box. This inspiration has been great, but up until now opportunities for young riders to try out track riding have been limited to the three outdoor tracks at Meadowbank in Edinburgh, Belahouston in Glasgow and Dundee’s very own Caird Park. Now though, only four weeks old and the Sir Chris Hoy Velodrome in Glasgow’s east end is packed to the gunnels with riders wanting to hit the boards. The track has already hosted the Scottish National Track Championships and “Thunderdrome” race meet and this weekend the cream of the world’s track stars descend on Glasgow for Round 2 of the UCI Track World Cup. It’s a fantastic coup for the Velodrome to be hosting an international competition so early in its life and the fact that 2000 tickets sold out in less than an hour demonstrates a voracious appetite from the public to see the gladiators of the fixed wheel battle it out on the wooden boards. Away from competition, the Velodrome is just as busy, with riders coming from all over Scotland to ride. Recently I was lucky enough to be part of a British Cycling School of Racing coaching session for 12 to 16 year old riders, and it was clear from the high level of skill and tactical nous on display that we are going to have many heirs to Sir Chris Hoy’s crown in Scotland; roll on the Commonwealth Games in 2014.

Although a trip to Glasgow isn’t a hardship, in Courier Country we are lucky to have our very own racing track at Caird Park, where Sir Chris gained his first Scottish Championship title and which has recently reopened after extensive renovation. The outdoor track here isn’t as steeply banked as the one in Glasgow, but it still offers all the thrill and gives opportunities to learn a multitude of track craft on the way to becoming the next Sir Chris Hoy. What are you waiting for? Get out and ride.