Taken from the Blazing Saddles Column in the Tayside Courier Weekend Supplement 3.11.12

Scot Tares explains why cycling is the scene to be seen in.

“Sometime jerseys are even uncool. The guys that have a bike and a helmet and that’s it, they’re my favourite mountain bikers” – Dave Wiens 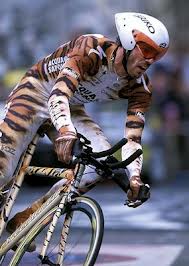 I’ve never been one for bright, garish cycle clothing; I recently won a “Soreen” malt loaf cycling jersey in bright and garish yellow, and my modesty only ever lets me wear it when I am on my indoor turbo-trainer. I much prefer understated cycle clothing, with my biggest statement being my 1984 woollen “Charles Star CC” jersey, that I wear more out of nostalgia than for its bright red, white and black diagonal stripe. Saying that though, I do have a certain smug feeling putting it on that I can still fit in to a jersey that I got when I was 14, (what I can’t remember is if my parents bought it several sizes too big for me, so I would grow into it).

I am, however fully aware that my preference for more subtle colours on the bike puts me out of kilter with what is generally considered to be safe, meaning “noticeable” to other road users. Don’t get me wrong, I don’t make a point of trying not to be seen; when riding in winter, even if my waterproof jacket isn’t neon yellow, I still make sure it is plastered with reflective strips. Unfortunately however, even if you were to hang a disco glitter ball from your saddle and wear a clown costume I still wouldn’t register on the visual radar of some road users, but this isn’t an excuse not to make an effort to be seen, which I do. I have at least two tail lights, a very bright front light and several reflective strips on myself and on my winter bike. Now that the clocks have changed though, I have found it disappointing to see so many riders cycling through town, not only in dark clothing, but not even with lights on. One rider in particular, as I drove past was stationary in the middle of an extremely busy road, after dusk, waiting to turn right; they were virtually invisible. Despite the obvious danger to the rider and other road users, I also find this frustrating as it reflects (no pun intended) badly on the vast majority of cyclists that do make an effort to obey the rules of the road. It’s a sad, but undeniable, fact that many other road users have a less than healthy respect for cyclists, so why give them even more ammunition by riding without lights or not wearing clothing to make yourself more visible when out on your bike. Unlike a motorist who uses a mobile phone whilst driving, a cyclist who rides in a manner that is inconsiderate to other road users tars every other rider with the same brush, such is the minority group that cyclists are still seen by many to exist in.

What is heartening, is that despite the poor weather and dark nights I am still seeing increasing numbers of cyclists out on the roads cycling safely and visibly and being responsible and considerate to other road users that we cyclists must share our roads with, and I even saw one rider last week wearing a “Soreen” jersey who was visible from a long way off, which just goes to show that you don’t always have to be following fashion to stand out and make a statement.

Where to Ride: Cycling in the Angus Glens