Taken from the Blazing Saddles Column in the Tayside Courier Weekend Supplement 30.6.12

Today sees the start of the Tour de France and all eyes will be on Brit, Bradley Wiggins who is on the verge of an historic first British Yellow Jersey win. In 1995 it was another Brit who was feeling the pressure. 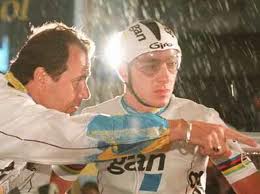 The 1995 Tour de France will be remembered for the last win in the reign of the Spanish rider Miguel Indurain, who had dominated the Grand Tours for several years and this would be his 5th overall victory in the Tour de France. It would also be the last Tour de France that a young Lance Armstrong would complete prior to his diagnosis of cancer, (he rode in 1996, but pulled out on stage 7 after becoming ill). In the 1995 Tour he won stage 18 in honour of his team-mate Fabio Casartelli who had crashed on a descent of the Col de Portet d’Aspet in the Pyrenees and later died as he was being flown by helicopter to hospital.

For British fans though, all eyes in the 1995 Tour were on Chris Boardman as expectations were high that he would pull on the coveted “Yellow Jersey”. The faith was grounded in stunning results: the previous year, Boardman had won the Prologue Time Trial after posting the fastest time over the 7.3km course with an average speed of 55.182kph and became only the third ever Briton to wear the Yellow Jersey in the Tour. Since then, only Scotsman David Millar has been added to this list, which also includes Tom Simpson and Sean Yates. Boardman was well known as a track rider, having broken the world hour record and also as a time-trial specialist.

Boardman took to the start as the leader of his team, wearing number 81 and also proudly displaying the “Rainbow Stripes” of the Time Trial World Champion, a jersey he had won the previous year. The conditions had steadily worsened as the later riders set off, and by the time Chris took to the start ramp the TV pictures showed a dark and dank evening, with camera flashes and car headlights reflected off the rain soaked tarmac, giving the viewer the impression of an ice rink rather than a road. A few minutes into Boardman’s ride and commentary from Phil Ligget gave early indications that Boardman was riding strong; then the reports that Boardman had crashed were broadcasted. No news or TV pictures followed and it wasn’t until later that the TV cameras replayed the accident that had befallen Boardman and the picture quality betrayed the atrocious conditions the riders were racing in. In the replay, a circular graphic is used to pick out Boardman as the darkness and rain make it almost impossible to see him. What is visible however is Boardman descending at speed and then at a left hand corner, his wheels disappearing from under him as he slides across the road and into the barriers, with his team car skidding behind to avoid driving over the top of him. The initial reports were that he had broken his collar bone, but it was later confirmed that it was his ankle that he had broken, thus bringing his 1995 Tour to a sad and painful end after only a few minutes.

The accident put paid to the rest of the season’s racing for Boardman, but he was back in 1996 on the TdF start line. In this year however, due to wet roads and perhaps a nagging doubt in the back of his mind, he rode conservatively and finished second behind Swiss rider Alex Zulle. In the following years Boardman again won the prologue in 1998, the year of the infamous Festina affair, before pulling out after a crash on stage 13. In 1998, he again won the yellow jersey, but crashed on stage two. Boardman’s riding career came to an end after the 2000 Olympics when he retired from professional cycling altogether; he had been diagnosed two years earlier with Osteoporosis but was unable to take the required hormone replacement therapy as this required testosterone, which was against the sport’s doping rules. He is still part of the British cycling scene though and now runs a successful bike business and commentates regularly on the ITV Tour de France and Track cycling events.