As I put on layer upon layer of clothing, I started to wonder why I was commiting myself to ride 500km between the 23rd and 30th Dec 2010. I’d also decided to ride the 500 on my fixed wheel. Something I had read way back, mentioned better traction in the snow on a fixed. 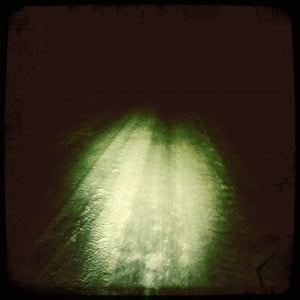 My ride started gingerly as I wasn’t sure how slippy it was going to be, but as my confidence grew so did the speed. The trick was to stay in the hard packed car tyre tracks, which although slippy with my Skinny Tyres were better than riding on the ice encrusted ruts between the tyre tracks. As I ventured further off of the main roads, the conditions got worse and at points it felt like I was riding on the pave as solid lumps of ice made the road seem like a single track more suited to mountain biking. At one section heading down to Pitcairngreen this caught me out and I was bounced around until the back wheel slipped out and I landed on my hip. I was thankful now for the extra layers of clothing.

As the ride progressed I became more confident of riding over the ruts and staying upright, although my heart was in my mouth a few times. As I headed back up the last mile to the house, the moon was rising high and everything was glowing white. I had only seen about 5 cars on the 27km ride and I was already looing forward to tomorrow’s ride.