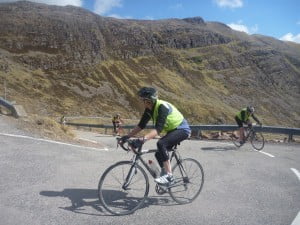 If you like your cycling to be packed with hills, then the Bealach Mor sportive is made just for you. For starters it features the ascent of the Bealach Na Ba pass on the Applecross peninsula; at 6 miles, the longest continuous road climb in the UK. Before that there are two other big climbs and to follow it a stunning rollercoaster of a road that packs in at least 20 short sharp climbs and descents into 25 miles.

The event has been running for several years now and has a lot of “regulars” who come back year after year to sample the delights of this unique area for cycling.

Traditionally the start is announced by a piper and the riders were keen to get started to escape the clouds of midges that had obviously been tipped off of the free feed at Kinlochewe. The climbing starts from the word go with a long ascent to the head of the glen. This is followed by 30 miles of flat riding towards Loch Carron. This is a chance to get some good, fast group riding and this year was no exception with small groups coming together to form a large peloton. A small group of six of us worked through and off to lead the bunch to the foot of the first climb, where the initial steepness shattered the rhythm and the cohesiveness of the large group. Small groups now crested over the top where the massive buttresses that guard the Bealach came into view towering over Loch Kishorn. 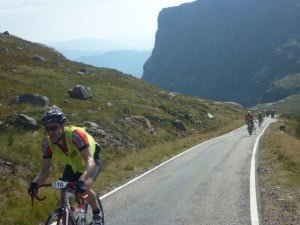 The ascent of the Bealach is timed and riders are required to stop and swipe their timing cards at the bottom and top. The fastest ascent this year was posted by Dave Moran of the Edinburgh RC team at 32mins 29 secs. The climb starts by following the contours of the hillside slowly and steadily before entering the jaws of the corrie. As it does so it steepens noticeably and heads directly towards the hairpin bends at the lip of the corrie. The headwall is steep enough at this point to look down the snaking road and see riders battling with gravity directly below you. The feed station at the summit offers a short respite, for those who need to refuel and at this point for many it is advisable as the challenge has only just started.

The next 20 miles or pack in at least one steep, but short climb per mile. Although not difficult in isolation, the accumulated effect breaks the rhythm and gives the feeling of having just ridden a very steep roller coaster.

At Shieldaig, I decided to stop for a good feed. My legs were feeling empty and I needed to refuel. As well as the usual babanas, flapjacks and water, I was delighted to see that this station was loaded with hunks of cheddar cheese and packets of mini cheddars. I spent a lovely 30 mins lying in the sunshine, enjoying the views into Loch Torridon and passing the time chatting to other riders who were of the same mindset as myself. All thoughts of posting a “time” had now vanished. I had ridden the event several times before and I decided that this time I was going to enjoy the atmosphere. However 17 final miles lay ahead and with the absence of any buses or taxis to take me to the finish, I was going to have to get back in the saddle and ride them. The stop and food had had the desired effect and my legs were raring to go and I soon got back into a rhythm again. A long drag up Glen Torridon, with a final descent into Kinlochewe and all that remained was to fill up on the excellent vege chilli provider by the event organisers and get a massage.

My time was nowhere near previous PB’s, but this year I didn’t care. I’d had a great ride with 500 other cyclists in fantastic weather, in a stunning part of the world.